My name is lee-Ann Kirwan. I’m currently a third-year student studying in Humber college Institute of Technology & Advanced learning for second semester of the international year. I am excited to see Canada as I always said I wanted to live in Canada or Australia when I was older. It was a great opportunity to see what Canada has to offer. I came to Canada on my own as my classmates David had already arrived a few days before and Sam was coming later. I met other students from wit travelling on my flight, so I got a taxi with them to the campus. There is two Campus for Humber college called North campus and Lakeshore campus. The Lakeshore campus is 21 minutes away from North campus. North Campus is only 2 minutes’ walk to North Humber college which is handy for 8am starts.

I am living on campus I thought the rooms would be better than what they are as they were a lot of money, but they will do for 4 months I’m here. I have my own bedroom on a big hall with other bedrooms and we all shared a washroom and common room together. All students must get a meal plan for campus which means the money is on student card. You get breakfast, lunch and dinner and there is also snacks, coffee and teas.

I have met some friends from Denmark, Germany, Netherlands and Sweden which are doing exchange same as me. Before I came to Canada we all have a WhatsApp group already, so it was handy to organise trips to do food shopping or to the mall and meet up as a group. The Humber International center girls Erin and Rebecca have been a great from the start when we got accepted to Humber college. They
organised orientation session when we arrived in Toronto to give us information about blackboard, transport and we were playing games to get all the international students to meet up. Rebecca organised a food tour walk to go to downtown. It was great chance to meet more people from different countries that haven’t been to Toronto either.

Unfortunately, when I arrived in Toronto the restrictions had change on that day, so they were back on stage 2 which met that all indoors restaurants closed, reducing social gathering to 5 indoor and 10 outdoors, museums, zoo, gyms, theatres, cinemas and college is online for two weeks. Hopefully some of them will be open in the next two weeks.

I have two classes a week which are Italian cuisine, practical culinary skills proficiency for seven weeks and then emerging trends in Canadian cuisine and advanced nutritional cuisine for another seven weeks which is unique feature in this course. I’m doing work on Thursday and Friday in Humber college such as food shop run by student cooking in college, restaurant on campus and receiving. It’s been an eventful few weeks already so I’m looking forward to Canada opening up properly. P.S I HAVE ALREADY BEEN TO ER HOSPITAL DEPT BEFORE A MONTH IN. 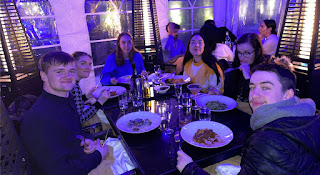 Posted by BACA International at 15:37