Hey guys, Lauren here writing to you from Edinburgh.

I am working in the Intercontinental the George Edinburgh which is a beautiful 5-star hotel in Edinburgh’s city center. I moved to Edinburgh at the start of February and started work very shortly after arriving first we had an induction day which included a bit of history about the hotel, a tour of the hotel, manual handling and fire safety training. They also provided us with a free lunch and plenty of coffee refills which was a nice touch and kept us all going through the long training day. We then also had some e learning we had to complete prior to starting work. I then started work on a Friday and was put on the banqueting section for the weekend as we had a function of 280 people in on Saturday which was the biggest function the hotel has had since its reopening. My first day was mainly all prep for the function on the Saturday which was a nice way to ease into work. For my first month I went between the starter section and the pastry section. We have been a short staffed lately which has been tough so some nights I’m running the two sections at once which is a lot to handle on a hectic Saturday night. But hey it’s definitely improving how I multi task and balance and prioritise jobs which is definitely a positive I can take from this experience. I am now moving onto the garnish section which is definitely hour busiest section, so I am looking forward to trying something different and I’ll keep you updated on how that goes.

In terms of hours, I have been doing three and half days on and three and a half days off. So I work an eight hour day and three twelve and a half hour days so I work roughly 45 hours in four days. We do have a new executive head chef who has changed the schedule around for next week so ill be working two twelve-hour days and two eight-hour days, which I like a lot better because I will be feeling less burnt out.

Overall, I am generally loving my experience in Edinburgh. It is such a lovely city sometimes I feel like I’m living in a post card. I would definitely recommend coming to Edinburgh for placement there is so many amazing things to do and places to eat and lots of young people (meaning a great night life). I will talk more about all Edinburgh has to offer in my next blog. 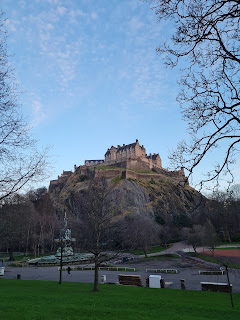 Posted by BACA International at 09:07