Freezing it up in the Big 6 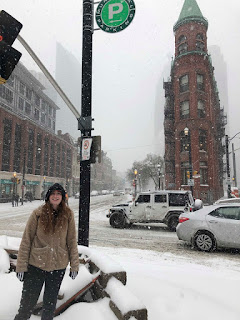 Hello again from Toronto or the Big 6 as they like to call it, which has something to do with their area codes I believe. We are currently living in the debts of winter and absolutely freezing but sure its still better than the rain I guess? At least I have finally learned how to take it easy when I walk and have stopped falling so much because honestly the first couple of weeks I was li
ke bambi on ice just booting it around the place. And on that note ill discuss some of the fun things we do before I get in to the education part of it all. Robert and I like to spend our free time exploring the city as its so big you can always find new spots if you try. As you can see in the picture to the left that is the Flatiron building located in the financial district which dates back to 1882 which would be quiet old for Canada, so this would be one of the most historic monuments in Toronto. We also Took a trip down to the distillery district which really is a must see when it comes to Toronto. Its full of craft brewery's, lovey restaurants and unique shops and boutiques. I really am glad that Robert was my partner in crime to this trip in Canada as he's always up for an adventure even if it is - 25 C.


We got an amazing opportunity to go winter camping with the Overhang Adventures crew to whom we went skiing with. This was honestly one of the most amazing experiences I have every been on. Three days two nights in the Killarney Provincial park. We started off our stay by pulling all of our equipment and supplies in sleds in some of the deepest snow I think ill ever see. Thank god we took a quick trip to Value Village and got completely decked out in snow gear, meaning 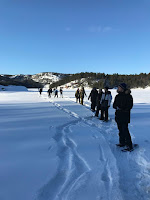 we could really enjoy the snow. That day we took a hike in our cool snow shoes, across a frozen lake and up a little valley. It was just utterly breath taking. We then had dinner which was burgers done on the BBQ and smores from the fire for desert. The group then broke away and a few of us went down to the lake at night to lay down in the snow and look at the stars. This would have been magical if it wasn't so overcast, it was still pretty fun tho. That night we all had a great sleep in our heated yurts.

The next day we all got up, had breakfast burritos and went for a morning hike where we learned about the pine trees and how to track a animal trails. We hiked up to the highest view point to see the Georgian bay, absolutely spectacular. 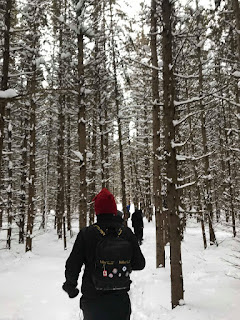 We decided to have a little fun before we had lunch after the hike and we went tobogganing which is just really fun sledding for all the world. One of the leaders brought two rings with him and they were particularly fun to go down the slope with. This honestly provided hours of entertainment throughout the day. We then had lunch and after lunch was quinzhee building time. A quinzhee is essentially an igloo but instead of building blocks you just gather and compact a massive hill of snow and then dig out the inside. This was with the hope that we would get to sleep in them but unfortunately the two that we attempted collapsed. One of which both me and Robert were in, it was fun being dug out of a quinzhee. The night went as it would with dinner, stories and a few sneaky cans back in one of the yurts before bed. The next day was spent packing, tobogganing and walking around before we got the bus home. I honestly can not begin to explain how much I enjoyed this weekend. it was worth every penny (300 dollars) and then many more.

Now on to the education portion. Not much has changed from my last blog, we're Coming to the end of this term and finishing up some of our courses such as emerging trends in Canadian cuisine. I quiet enjoy this class as Chef Simon really listen to his pupils and lets us experiment with cool trends such as textures of veg and smoking purees. After this we will be moving on to other subjects like Farm to Fork Sustainability which I look forward to. Thankfully we will be staying in Butchery as we have settled in quite well in that class and hey its also quiet fun not only watching the demonstrations but also getting to practice on good stock. Humber college is a great college I just wish (believe it or not) that we had some more classes as I feel we have far too much free time. So I would highly suggest if you we're to choose Humber to get a co op visa so that you could take up a part time job as well as go to college. Hey minimum wage is 14 dollars in Canada so that would be pretty sweet ehh. I believe That's all for now. Thanks again for listening to my random babbles

Posted by BACA International at 15:23