The first and largest of the four Johnson & Wales University campuses, the Providence campus is home to more than 9,000 students and is spread across 176 acres in the city center, as well as being among the most highly-regarded culinary schools in the United States. The school was originally established in 1914 as a business school but over the years it has developed to include a number of other disciplines and the Johnson & Wales Universities are now the largest food service educator in the world. 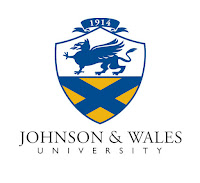 Culinary, hospitality and business programs are by far the most popular courses, although there are also arts & sciences, graduate, engineering and design programs available.

Around half of the JWU student population live in one of the 13 on-campus residence halls, while many others choose to live in downtown Providence, one of the United States’ oldest cities and home to over 30,000 students (more on this later). The city itself is a renowned cultural center and has an extensive waterfront full of bars and restaurants, while the cities of Boston, Cape Cod, Newport and New York are a short drive away.

The university has produced some world-famous chefs who work in countries all over the world. Among the famous faces that have graduated from JWU Providence are Randal Tye Thomas, the former mayor of Gun Barrel City in Texas, as well as celebrity chefs Chris Santos and Emeril Lagasse.

Here’s a link to learn more and explore the campus and opportunities for yourself - https://www.jwu.edu/campuses/providence/life-on-campus/index.html

Johnson and Wales is great for practical classes, in fact all of their classes involve practical's in some ways. They have a wide array of classes you are going to find here. I know myself my modules were Brewing Arts, Exploring Cheese, Garde Manger, Classical cuisines of France and Italy and something else which eventually was changed to nutrition for online classes.

An interesting thing that happens when you’re an exchange student is you’re placed in a variety of years for classes. One practical may be with 1st years and another with 3rd or 4th years so it’s a strange situation but allows for you to see the quality of the students and teachers at different levels.

My advice for anyone in general is always do the work part first. Work over the summer and give yourself as long as possible to learn but also to earn as much money as you can to attend college. Johnson and Wales is by no means cheap to attend. I’ll speak in detail about some of these certain aspects more in a moment but just speaking financially (approximate figures):
·         Accomodation (which is mandatory) - $4000
·         Meal Plan (mandatory) - $1450-$1700 depending on which option you take
·         Insurance / Nurse – To pay for access to the nurse on campus is $600 per semester or go over having your own private insurance which I had done and cost between 150-200 euro.
·         Flights – Depends when you buy them, flights are a luck of the draw. I purchased mine late because I had a delayed embassy appointment and paid around 750 euro return.
·         Medical Exam – In order to apply and be accepted you are sent an extensive two page medical exam which will take serval trips to your doctor to insure all your vaccinations are within the last two years, have your boosters and so on. I myself ended up paying around 80 by the end for it and that was on a medical card.
·         Embassy Appointment and other Online Applications – Before being able to apply for an embassy appointment and go for your visa you will have a couple of other online applications you’ll need to do and pay for, to the best of my knowledge this bill in total comes somewhere between 100-200 euro.
Accomodation 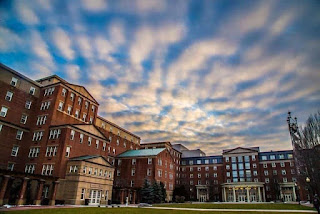 When going to JWU it’s mandatory that you live on campus. As mentioned above there are 13 student accommodations but we were given the option between two and they are the two I'll speak about and tell you about both.

You have McNultty Hall (Inner City) which is right in the heart of Providence, filled with students and places all the other international exchange students who you’ll meet first during your introductions and getting set up. It’s ideal for getting out, going for drinks or food in the local restaurants. I would suggest if you are over 21 to invest in a passport card, they only accept a passport as ID over there so it’s your best shot unless you’re confident enough to carry yours around everywhere with you.
Harbour Side (Outter City) This is about a 10-minute drive outside of the city but it’s a 5-minute walk from the campus you’re based on. We were given the option of the two and went for the one closer because we were aware of the early starts to life there. Classes there start at 6:45am sharp, in full uniform, ironed and inspected upon entering class. There are buses available from McNultty but we opted for the closer one. Easier to go back during breaks, after class etc.

Regardless which you pick you’ll more than likely end up sharing a room. I travelled with a class mate and we were placed in a room together which was fine but we also had a third with us so privacy isn’t included in their package when paying for your dorm. Opposite is a diagram of the exact room layout we had. 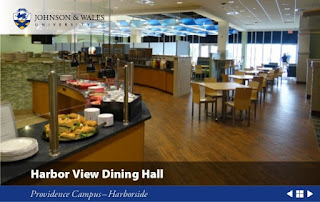 Something different for you going over there is their meal plan set up. A mandatory thing so it’s a matter of do you sign up for 14 swipes a week or 21 I think is the larger option. How they work is in your dorms they have buffet style canteens in which one swipe to enter and then eat as much as you want, McNultty being better than Harbour View in this case, and only certain meals change daily while the rest are mainstays. They also work in places on campus so a swipe may get you a slice of pizza, a drink and a salad or two pizza slices and a drink etc. You learn a lot more about this stuff there and people are nice enough to help you if you are better off paying than wasting a swipe on something.

A main one people use swipes for is the Starbucks on campus. A swipe can get you a drink and a pastry for one but the lines before classes are incredibly long so you have to pick and choose when you go.

If you go McNultty although the food is better there, they are also surrounded by shops, restaurants and takeaways so 100% go for the fewer swipes and explore more things. Harbour View is a bit out of the way from most things so consider both options and see what kind of person you are.

Classes
One final thing to note is they do morning and evening classes. Morning classes begin at 06:45 sharp, in pristine uniform and the evening class is 13:45 I believe. We were placed in the morning classes which isn’t too bad, gives you your whole evening to get work done and familiarize yourself with the college and surroundings.
A negative is they don’t provide changing rooms so you walk or get the bus in your uniform. Just something to note.

If anyone has any questions which haven’t been answered here then speak to Don and ask for my details and I'll be happy to get back to you and talk to you about any concerns or answer whatever questions you may have.

Posted by BACA International at 07:05