My name is Ciara Power and I am a 3rd Year BA (Hons) Culinary Arts student in WIT. The requirement for this year is to complete 12 weeks of both international study and work.  This unique prospect was what convinced me to apply for the course in the first place, so I was hugely excited for it to begin.

I will admit to completely falling out of love with kitchen work well before this year commenced, and while I do intend on working in the food industry in the future, it won’t be as a chef. Though I had no exact destination in my mind as to where I wanted to work, I promised myself I would make the most of whatever was about to come my way. So, when an opportunity to work in a hotel kitchen in the south of France arose, I couldn’t say no. As scary as the idea was, I thought of it as the last hurrah, one last kitchen job and what better place to do it!

I found the job through our helpful placement officer Don, who had contacts working in the hotel. One translated CV, multiple e-mails, and a Ryanair flight later, I was on the way to Chateau L’Hospitalet Narbonne, with nothing but pretty basic French and a suitcase full of chef whites.

Chateau L’Hospitalet is located on the Gérard Bertrand wine estate beside the Mediterranean Sea. It is a small but beautiful hotel. Guests come to explore the vineyard and biodynamic winery. L’Art de Vivre is the name of the restaurant which is a fine dining restaurant. The head chef hopes to earn a Michelin star in the next guide.

I flew to Carcassonne, got a bus to the train station, a train to Narbonne and then a taxi to the hotel. It was a long day of travel but was relatively straightforward all the same. I was going alone, which to be honest I was dreading a little bit but I had experience in moving abroad after spending two summers in NY. When I arrived, I was shown to my room and then had lunch with the rest of the staff. After, I met the head chef, who informed me I would be starting work in no less than an hour after. Très bien! Though this came as a bit of a surprise, it was actually the best thing that could have happened because I was able to familiarise myself and be at ease in the kitchen immediately. 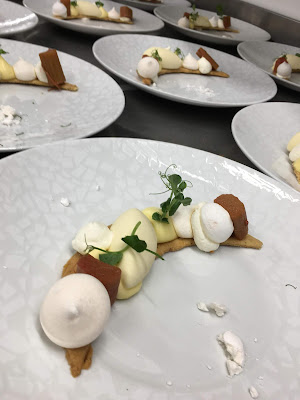 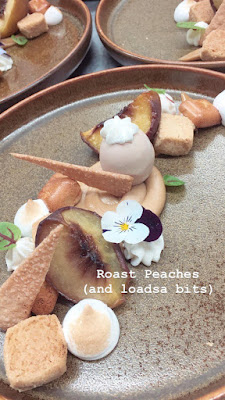 Before I even got to France I had the kitchen built up to be a really intense, scary environment. However, for the most part, it is calm and enjoyable. I had requested to work in the pastry section, which ended up being the best thing I could have ever done. It was a completely daunting idea to work in the home of patisserie but if I was to go to France I wanted to learn as much as I could. Thankfully, the pastry chef, Seb, simply could not be more encouraging or lovely. He also is very understanding that I have limited French, and just laughs when I bring back a whisk after actually being told to get a box of pears... though I’m slowly improving with time.
While it is a hotel, the kitchen isn’t your stereotypical hotel setup. While there are some events, they’re not ever huge or frequent. So far, I have worked for a barbeque, a harvest festival and for some jazz nights. The standard of food remains fine dining despite the larger amount of covers. And of course, it's only the best of equipment and ingredients so the finished product is always amazing. 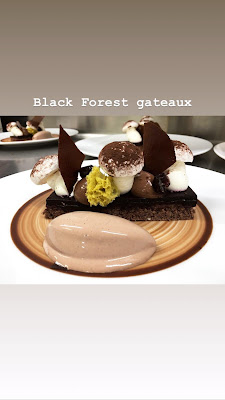 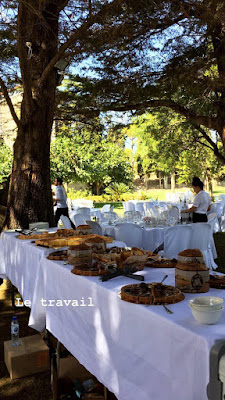 I am technically doing a stage. This means I am not getting paid by hour but will get a sum of around €500 a month. Though this may seem a bit unfitting for the 13-16 hour days, I knew what I was signing up for. I do however get free accommodation, which is reasonably big. I share with 2 others and we all have a double bed and plenty of space. There is also a little corner with a fridge, microwave, and kettle (essential for those all-too-important emergency cups of Lyon’s tea). The staff food here is also free. Two meals a day and it’s not bad. With all this in mind, the small amount of pay can be justified. The hotel is 30 minutes away from the closet shop or restaurant so any spending really is discretionary, and remember, there’s always the Erasmus grant.

So that brings me to the end of my first blog. I’m only here just close to two weeks so haven’t had too much time to explore the nearest towns or cities so I shall check back in when I’ve found out more.

Posted by BACA International at 07:14